What Are the Most Common Parts of a Crane? | Crane Company 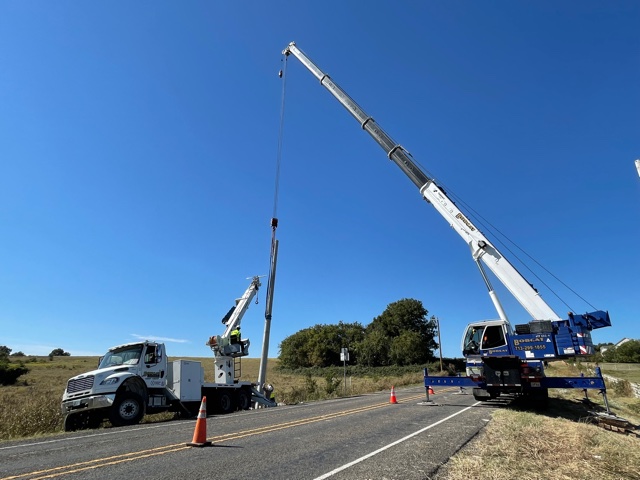 Whenever you rent a crane from a crane company, it’s a good idea to know what you’re getting – and that means understanding the basic components found in most cranes.

Your crane company will undoubtedly do their best to educate you on the crane you’re renting, and they probably also supply their own workers and operators to ensure you get the best experience.  Still, it’s a good idea to know what you’re getting, since understanding the parts and functions of various crane components can help you know what type of crane your job requires.

So, here’s a quick rundown of the most important parts of a crane.

The Nine Key Components Found In Almost Every Crane

It’s not a crane without a hook or similar device for attaching the crane to the cargo it needs to haul.  Sometimes these hooks are true hooks or other times they use more complicated latching mechanisms for better stability and grip during movement.

Either way, these hooks tend to be extremely large and made of the most solid materials possible, such as tempered steel.  They need to be able to hold up many tons of materials without bending or breaking.  This also includes their attachment point on the other end, which goes to:

The hook attaches on top to cables which allow the cargo to be smoothly lifted and lowered.  The cables are typically made of pure steel cables which are then twisted together into a helix, like the construction of a rope.  Like with ropes, this distributes the weight of the load, reducing the strain on each individual strand, while also reducing the chances of a catastrophic accident.

If one strand in the cable breaks, the entire load won’t come crashing down.  The crane, however, cannot be safely operated like this.  The load needs to be lowered as soon as possible, and a new line attached.

In some cases, a crane may even have multiple cables attached to the boom by a series of sheaves – pulleys – to increase capacity and stability.  This is particularly important if it’s an unusually shaped load or otherwise has an offset center of balance.  Multiple lines may be needed to keep it stable while in motion.

Arguably the most prominent and visible part of a crane, the boom is the arm that extends outward from the main body of the crane.  It does most of the heavy lifting, so to speak, having to hold up the weight of the load while it’s moving back and forth.  This means the boom has to be able to withstand significant lateral stresses, on top of the pure lifting force needed to hold the load up.

There are two basic types of booms.  Lattice booms are probably the most familiar using a series of welded supports linked to long pipes.  This gives the boom stability and strength, while greatly reducing its weight.

Other cranes use telescoping hydraulic booms.  These aren’t as strong as most lattice booms but are useful for keeping the overall size of the crane lower.  They also allow for more forward/backward movement without moving the crane itself.

Not all cranes have a jib, but many do, particularly those with lattice booms. The jib is a separate telescoping arm at the end of the boom.  It allows loads to be moved further away from the crane, without repositioning the crane.

Some jibs even have hinges, allowing them to have some up-down movement as well.  These can be crucial when placing the load at a very specific place, such as in a building under construction.

A crane can’t deadlift the load without a lot of support counter-balancing the load, which is where the counterweights come in.  They’re generally attached on the opposite end of the boom, on an arm extending out in the other direction.

Generally, counterweights are removable, and the number attached to the boom at any given time will be determined by the weight of the cargo being lifted.  The two weights should be roughly equal.

The final crucial component in moving the load around is the crane’s hoist. This is the mechanism that controls the cables’ movements.  The hoist typically has an extremely powerful motor, along with several thousand feet of cabling, allowing operators to have a lot of leeway in how high they can raise the load.

The operator’s cab is located in the main body of the crane and needs to have excellent visibility on all sides – while also being as shielded as possible against mishaps.  Depending on the size of the crane, the cab may be difficult to spot, or it might be prominently placed to give the operator more visibility.

Moving to the base of the crane, stability is crucial.  Once in use, the crane absolutely cannot move, or it could destabilize the load. So, rather than relying on the crane’s wheels or treads for stability, a series of (usually) hydraulic outriggers extend outwards from the base of the crane and are firmly attached to the ground.  Most of the time they fully lift the crane off its wheels/treads, to eliminate any possibility of mechanical failure that would throw the crane’s balance off.

Finally, at the ground level, most cranes have either wheels or treads to give them mobility.  These aren’t used while the crane is in operation, but rather allow the crane to be maneuvered around the job site.  Wheels have better mobility, but treads are best on uneven or muddy ground.  Occasionally, cranes are mounted directly onto the back of trucks or flatbeds, but this is typically only for relatively small cranes.

If they have wheels, they can also potentially drive on roads, although this will vary entirely based on the size of the crane and local laws.  More often they’re hauled on the back of an appropriate truck.

Since our founding as a one-man operation over 25 years ago, Bobcat Contracting has grown into one of the most reliable construction support contractors in Texas.  We’re more than just a crane company – we supply a wide variety of heavy vehicles, tools, machinery, and expertise to working sites across Texas and Oklahoma.  We have a scrupulous focus on safety, which is why contractors turn to us time and again for support.  Our safety record is truly among the best in the country.

If you’re working a job that calls for a crane or other heavy equipment, Bobcat will get the job done right, while protecting your workers and assets.  Contact us for a consultation.