Understanding the Lifting Capacity of Your Rented Crane 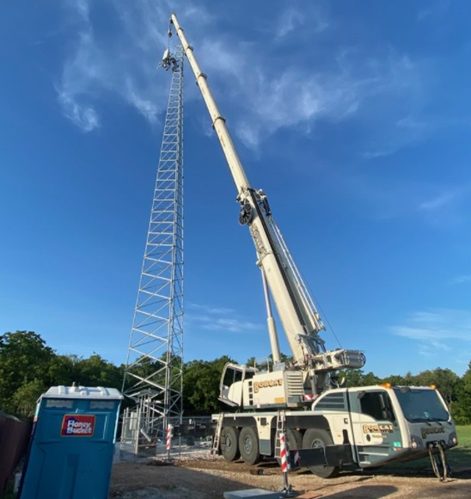 When you need to lift a load, you need the right tool for the job.

Not every crane is created equal, and they can have vastly different lifting capabilities.  When you work with a highly experienced crane rental service, they can offer invaluable advice and help ensure you get a crane that fits your needs.  This is one of many reasons that employing a crane rental service is usually better than owning your own crane – you get access to a large fleet of cranes, which can be matched to each job you need to do.

However, it’s still useful to understand how crane lifting works, what determines the maximum load a crane can handle, and what environmental factors can influence its lifting ability.  In this article, we’ll discuss these issues, so you can make informed decisions the next time you hire a crane rental service.

How Much Can A Crane Lift?

There’s no simple answer to the question of how much a crane can lift because it relies on a wide variety of factors.

If you’re curious, the current maximum weight yet lifted by a crane (as of 2021) was a staggering 20,133 metric tons – which is heavier than the entire Brooklyn Bridge!  This was achieved by the massive “Taisun” crane at the Yentai Raffles Shipyards in Yentai, China, when it lifted a full shipping barge full of water.  In fact, this crane holds all three of the top lifting records.

That lift was at the upper limit of its capabilities, so if someone wants to lift something even bigger, they’ll need a bigger crane to do it!

Of course, you probably aren’t trying to lift entire cargo ships.  Most crane rentals are aimed at more mundane construction work or used for additions such as adding air conditioning units to building rooftops.  There are numerous cranes on the market capable of this work, so it’s simply a matter of matching a crane to the environment and desired lifting weight.

As a general rule of thumb, tower cranes can lift up to 20 tonnes, while mobile cranes could potentially lift anywhere from 10 to 60 tonnes, depending on their size and mobility.

Calculating the Lifting Weight Of A Crane

These are the factors that influence the maximum weight of the lift.

There’s more to knowing the hanging weight of an object than simply measuring its weight and mass on the ground.  Once the object is lifted into the air, and subject to forces such as gravity and acceleration, things get a bit more complicated.

When the object is hanging in the air, Newton’s Laws come into play, particularly the 2nd Law.  The formula for this is:

F (Force) = M (mass in kilos) x A (acceleration).  If the load is completely stationary, then the downward force is simply equal to its mass times the gravitational constant, which is 9.8 m/s^2.  This is how much force the crane must be able to exert to lift the load straight up.

However, even minor winds can add acceleration to the formula.  Plus, of course, the object being lifted probably needs to be moved around, which adds more acceleration created by the crane.  Each crane has its own movement capabilities, which would then need to be calculated as part of the above formula to figure out the total necessary lifting force.

Cranes rarely lift an object straight up, as in a deadlift.  Generally, the crane’s arm is extended, and placed at a certain angle above the load.  This changes the matter of lifting into a trigonometric problem because the angle of lift will significantly alter the amount that a crane can lift.

Basically, the longer the crane’s arm is extended, and the more extreme the angle it’s lifting from, the less it can lift.  This is because of the equal-and-opposite angular forces that the lift is placing on the crane itself, which become increasingly severe as the angles shift.

Fortunately, you or your crane rental service don’t have to do these calculations by hand.  A crane’s operating manual will always include detailed charts discussing its lifting limits at various angles and extensions.  It’s vital to always refer to these charts before planning a lift because if you exceed the manufacturer’s recommendations, you’re likely to get into trouble.

Finally, anyone operating a crane needs to keep an eye on the weather, particularly the temperature.

In particularly hot weather, especially when the temperature gets above 100°F, the crane will be prone to overheating.  This doesn’t directly affect its lifting weight, but it means the crane will be straining and will need to be monitored closely to ensure nothing goes wrong.  It will probably need extra lubrication, coolants, or opportunities to cool down.

Cold weather creates a much bigger problem, as cold weather will reduce the crane’s capacity.  Components can become brittle, and less able to handle heavy loads.  Generally speaking, a crane at freezing temperatures (32°F) will only be able to lift around 75% of its maximum weight.  If the temperature gets down to 0°F, that drops to 60% of its rated weight.

Operating a crane under these conditions is generally not a good idea but can be done when necessary.  However, lifting should not be attempted once the temperatures get below zero.  At that point, it’s just too dangerous because the crane’s capacity will be unpredictable.

Likewise, heavy winds and storms can present serious problems for a crane.  Gusts of wind can add sudden acceleration – and therefore force – to the lift, which can cause accidents if the crane is already near maximum capacity.  Rainstorms can saturate the load, adding extra weight.  Plus, nearly all cranes are vulnerable to lightning strikes.

For this reason, we strongly advise against ever running a crane when a storm rolls in.  There’s too much that could go wrong.  The costs associated with shutting down early for a day are nothing compared to how much damage a shattered crane could cause.

For over twenty years, Bobcat Contracting has been one of the most trusted crane rental services among businesses in Texas and Oklahoma.  Our focus on smart lifting and safety procedures has given us a safety record that is genuinely unmatched in the industry.

If you have a load to lift, and you want to make sure it’s done right without mishap, contact our team at Bobcat Contracting for a consultation on crane rentals.